The stepping stones of food and art have left a solid path in my mind that trace back to my happiest childhood memories.  There are very few moments I can recall that are not laced in food or art, and many of my most prominent recollections revolve around taste.  My days off of work are a marathon of field trips to local eateries.  Good food makes me happy.

My mom and I had the privilege of celebrating not only my 30th birthday, which was on May 27th, but, my mom’s survival and defeat of stage four kidney cancer.  It has been a month since her surgery and in two months she will return to the hospital for a series of tests, but the doctor told us that, as of now, she is cancer free!  My dad was gracious enough to treat my mom and me to a ladies’ night out at Manresa.

My only partial regret is that I did not research much before walking into Manresa.  But at the same time, it was delightful to have been surprised.  There is something so exciting about having no clue what will happen next.

Our three and a half hour marathon of flawless performance was satiating and over-the-top in a certain and unassuming manner.  As we walked onto the property and through the doors of Manresa, we were greeted with a quiet nod from the staff and Chef David Kinch, before he withdrew to the kitchen.  The ambiance was clean and unnoticeable, the only elements that stood out were those of the woodwork fixed throughout the rooms that served as a perfect canvas for the colorful cuisine. 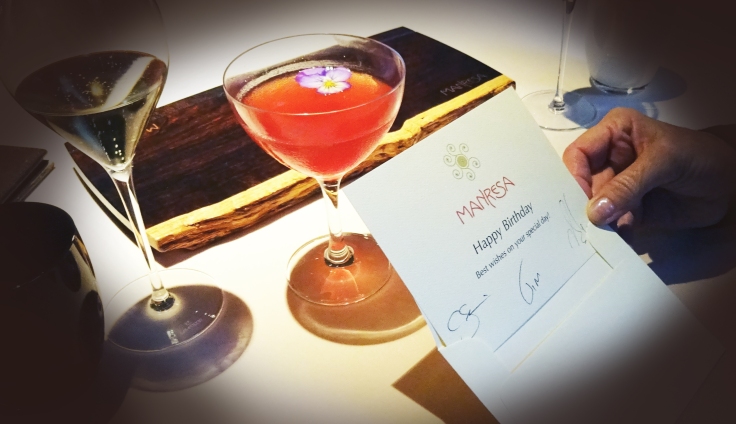 We started our adventure with a few glasses of complimentary champagne from the Chef.  A personalized card was waiting for me on the table that was signed by the heads of staff.  Sean, our main waiter, was kind and professional.  The assisting wait staff floated around without fault.

The freshness of California produce is placed on a French-inspired pedestal and glazed with an almost indistinguishable hint of Japanese flavor.  The only relief that breaks a victim from their hypnotic food-staring is the overwhelming temptation of their salivating taste buds and the promise that another dish will eventually come out of the kitchen that is of equal or greater value.

Our courses began with small bites, granola crisps, savory “candy” jellies and savory Madeline cookies (Petit fours “red pepper-black olive”), and caviar beignets that exploded with flavor.  I could have eaten twenty of those little beignets and I would have been happy for the remainder of the evening.

A farm egg that glistened with honey was adorned with the tiniest purple coriander flowers.  It seemed to balance on the side of a plate, and it burst with the combination of flavor from hidden chives and crème fraiche.  It was divinity in an egg shell.

We moved into small plates and starters that featured seafood and Manresa’s “into the garden” green and bitter salad.  The salad was quite literally one of the most beautiful dishes that I have ever laid my eyes on and it tasted better than it looked. 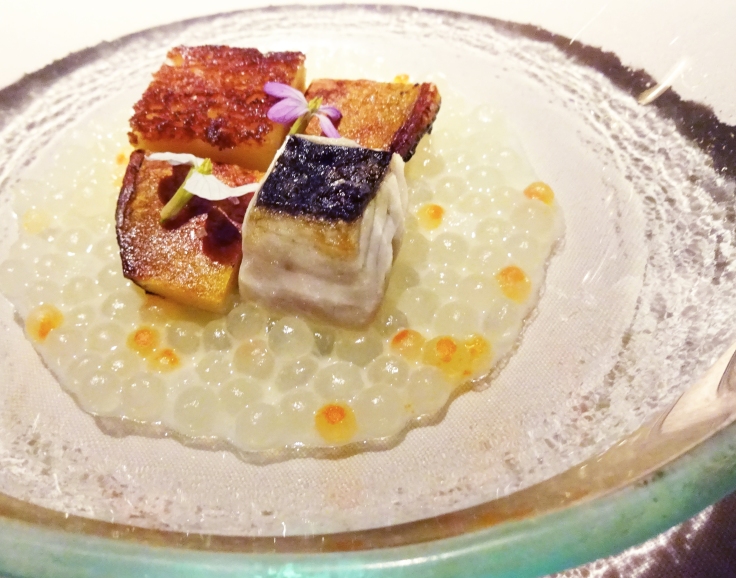 Buttery tapioca with radish and parmesean created a miniature ocean around floating islands of abalone and tamago.

Fish, seafood, and light proteins were gifted to us, each one just as flawless as the next.  The presentation of the colors and flavors of the vegetables and fruits, mixed with the proteins caused my eyes to sparkle more and more with each new course that came to us.  It was heaven.

Dishes featuring heavier proteins, such as spring lamb and poularde, were presented toward the end of the main courses and were adorned with no less than perfect sauces and produce.

Throughout the main presentation, Manresa breads were offered to us.  They do sell their bread in Los Gatos, as well as the Sunday Campbell Farmer’s market.  There is always a well-deserved line at their stand.  Their brioche is to die for!

At the end of the featured courses we were given the option to partake of the cheeses that were waiting patiently on their little red cart.  With great reluctance we decided to opt out because we were so full.  But, the aroma of the smelly cheese was astounding as it wafted through the entire room every time someone caved in to the pungent temptation.

Chef Kinch came over to our table to talk with us.  He told us that he gave us the best table in the house:  the corner, in the main room, facing the entirety of the dining area.  We did not miss a beat and we were able to absorb everything that happened around us.  We thanked him for such a fabulous experience and he withdrew, once more.

Dessert started with matcha green tea meringue wafers, cherries, and lime that stacked into a beautiful miniature tower; it turned into a bloodied mess after one vicious swipe of our spoons.  Tart and bitter was balanced with the sweetness of the cream.

A small slice of semi-fredo cake and a simple candle topped off our night of celebration.

Our next two desserts were displayed together as a pair of battling flavors.  (I do regret not taking pictures of these two desserts because they were gorgeous!)  One was wrapped in a thin layer of solidified dark chocolate, and showcased strong and pungent summer herbs in the form of gelato and sauce.  Bitter, interesting, and full of so much green flavor, it was unlike any dessert that I ever eaten.  Her sister dessert featured strawberries, pistachios, and toasted milk gelato;  it was the sweeter and more traditional dessert of the two.  Together, they were a grandiose symphony of flavors that violently teased our senses.

To conclude the ceremony, guests were given a closing dessert course that was scattered with sparkling chocolates, familiar-and -yet-different sweets, and the most delectable variety of French macarons.

As a parting gift, we left with keepsake personalized menus to and small boxes of house-made “oh-so-California” granola featuring dehydrated strawberries that caused me to giggle under my breath; Chef David Kinch’s nod to “Nor-Cal” granola techies was veiled in satire that was hella subtle.  Bravo, Chef.  Bravo.

Thank you, to the entire staff of Manresa, and to Chef David Kinch, for creating such a memorable experience that my mom and I will be talking about for years.  I cannot wait to visit, again.